There are more herbs for digestive issues than for just about any other issue, maybe because digestive problems are one of the most common complaints. Almost every herb we use in cooking has a beneficial effect on digestion, which is part of the reason we use them in our food. Though a lot has been said about many of the standard digestive herbs like Fennel, Chamomile and Ginger, the three that are my favorites right now are Cardamom, Betony, and Meadowsweet. These have become my “go-to” herbs for digestive problems as well as many other issues.

Cardamom may be familiar to anyone who’s eaten Indian food, but it’s become one of my most used herbal tinctures over the past couple years. It is the seed of a plant (Elettaria cardamomum) in the same family as Ginger and Turmeric, and with some similar properties. It is warming, aromatic, and slightly bitter, so it can act as both an aromatic digestive herb and also a bitter.

Aromatic digestives (also called carminatives) help soothe digestive upset from over-eating and act as a mild anti-spasmodic for the gut. Most of our cooking herbs are aromatics and have some of this property of stimulating digestion – for example Cumin, Coriander, Oregano, Cinnamon. Some medicinal herbs are known to have a stronger action on the gut – Fennel, Peppermint, and Ginger for example.

All herbal bitters, really anything with a bitter flavor, stimulate digestive secretions like stomach acid and digestive enzymes which “prime the pump” and helps us break down our food more easily. There’s been so much written recently on the the myriad benefits of bitters that it might be a whole other blog entry.

Cardamom has both these therapeutic properties, being a carminative and a bitter. It’s often added to chai tea (“Masala Chai”) to assist in digesting the milk. It’s also excellent for nausea when Ginger would be too heating or for some reason not well tolerated. I also use it after a meal when it feels like the food isn’t digesting well, especially after eating heavy, oily or protein-rich foods.

But it is more than just a digestive herb. Cardamom helps calm the mind, and some Ayurvedic practitioners advise adding it to coffee (as it often is in Turkish coffee) so that the coffee isn’t overly irritating to the gut or too stimulating for the mind (Ayurveda would say it helps calm excess Vata). I’ve put a small amount in formulas for other issues just to harmonize the formula, since there’s a sweetness to this herb that is very grounding.

I use Cardamom as a tincture, but the powder or freshly ground seeds can be added to food, hot drinks, or smoothies. I find it’s better to get whole decorticated seeds and grind them fresh because the powder deteriorates quickly. 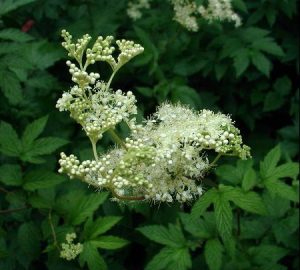 Meadowsweet (Filipendula ulmaria) is an occasional weed in some places, and is a great medicinal plant for many reasons. It contains salicylic acid, the constituent also found in Willow bark from which aspirin was originally synthesized. As such, it is an excellent anti-inflammatory and pain reliever, especially for headaches with a feeling of heat in the head, but also for joint pain.

I primarily use it is for inflammation and irritation in the gut, especially if there is a sensation of heat. I’ve found it very helpful for acid reflux, heartburn, and irritated stomach. I think of it as an “herbal antacid” but to be honest I don’t know if it actually reduces stomach acid or just makes our bellies feel better.

I might add in Meadowsweet to balance out stronger herbs that might upset digestion, or combined with antimicrobial herbs like Barberry (Berberis vulgaris) to treat a stomach flu or single-cell parasites. The Meadowsweet is more to treat the symptoms while the anti-microbial herbs work on the cause of the disturbance. Helping the irritation may also help with diarrhea.

It is the leaves that are used, fresh or dried, and as either a tincture or tea. If someone’s stomach is very irritated, some vegetable glycerine or honey can be added to create more of a soothing remedy.

And the final remedy I want to talk about is the extremely useful herb, Betony (Stachys betonica) – not to be confused with Wood Betony (Pedicularis spp.). If you are buying this herb, make sure to check the botanical name as the common names of these two fairly different plants are sometimes used interchangeably.

Betony, also known as Stachys (pronounced “stay-keys”) is easy to grow in the garden, and its leaves can be used as tea or tincture. It can be used for such a wide variety of ailments that it is considered one of the top herbs in Europe, though it is just becoming more well-known in North America.

The primary use of Betony is as a nervine to calm an over-stressed nervous system. Although any relaxing herb will help with digestion to some extent, this herb seems to have a little something extra. Maybe this is partly because it is in the mint family (Lamiaceae), although it doesn’t have a strong aroma like some mint family plants.

Betony is my choice of herbs when someone has an upset stomach from stress, tension or worry. Chamomile might be more well-known and easily available, but Betony seems to have a stronger effect on calming the mind. I’ve used it for headaches from poor digestion or from stress as well with great results. It has a wonderful grounding effect as well.

Keep these three herbs around your house and you can help almost any digestive upset!

This error message is only visible to WordPress admins